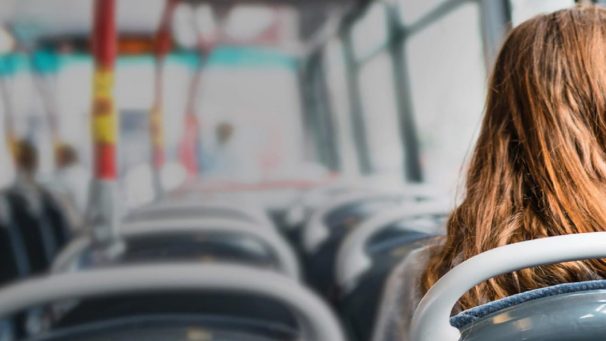 Declining transit and bus ridership is indicative of a new era in mobility, heralded by emerging technologies and increasing consumer options. The last decade has seen a decline of nearly 5 percent in overall transit ridership, including a cumulative 15 percent decline in bus ridership over the same period. With the continued dominance of the single occupancy vehicle, the rise of a sharing economy, and underinvestment in the transit system, public and private sectors must embrace emerging technologies and new consumer behavior trends to stay reliable and relevant. Through demand-orientated transportation systems, including microtransit and enhanced bus service, cities and civic leaders can reshape mobility, improve safety and reduce carbon emissions for all.

Mobility Snapshot  An overview of the current state of the mass transit system and popular consumer behaviors.

Overall transit ridership is down 5% over the last decade, led by declining bus ridership.

85% of Americans commute by car; of those, 90% are commuting alone.

90% of potential bus users live or work within a quarter mile of a bus stop in urban cores.

The rate of decline has accelerated over the last three years, reaching negative 3% in 2017.

Only 30% of urban jobs in the U.S are accessible within 90-minutes public transportation trips.

$90 billion backlog of unfunded infrastructure projects to keep bus and rail systems in a state of good repair.

To succeed, mass mobility must address the following key issues that contributed to the decrease in mass transit ridership.

Challenge #1: An emerging sharing economy
Customized service with a focus on convenience has transformed the commuter landscape. Ride-hailing and ride-sharing services added 5.7 billion vehicle miles in nine major U.S. markets. Car sharing is predicted to grow to 36 million by 2025, up from 10 million in 2017. Other popular transport options include bike sharing, scooters and motor scooters, all of which have seen a recent increase in commuter activity.

Challenge #2: The single occupancy vehicle
In the United States, 85 percent of people commute by car, and 90 percent of those commuters drive alone. Despite the high cost of driving—more than $9,000 per year, according to an AAA report—KPMG’s analysis predicts an increase of 160 percent in vehicle miles traveled between 2015 and 2040. Traffic congestion is also expected to rise by more than 50 percent by 2030.

Challenge #3: Underinvestment
With bus fleets nearing the end of their useful life cycle, additional operating costs and a $90 billion backlog of projects to keep the bus and rail systems in a “state of good repair,” the transportation sector struggles to provide competitive, reliable and environmentally sustainable service.

By studying the origin and destination patterns of consumers in three cities—Denver, Houston and San Diego—KPMG’s industrial manufacturing professionals found opportunities for civil leaders to leverage consumer data and deliver transportation options for the digital age.

Learn how mass transit can adapt and thrive in "Accelerating mobility".

On track for high speed

KPMG is helping the California High Speed Rail Authority with long-term planning and commercial strategy for the first high-speed rail.