Embracing innovation: Disrupt before you are disrupted

How are organizations innovating for the future? Join us at Ducks Eatery in NYC’s East Village, where innovation is on the menu. Here, we chat with start-up executives about ways organizations are making innovation happen, from signals to action. 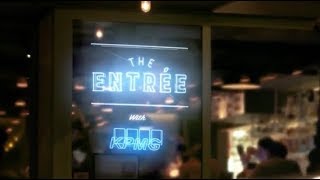 View all episodes of "The Entrée" video series

Me, my life, my wallet - first edition

Based on extensive research, KPMG has developed a framework to help companies identify, understand and respond to today’s changing customer.

Chris Riccobono: I surrounded myself with a lot of industry veterans on our team when we launched and they would say, "Sorry Chris that's not the way factories work,” and I would say, “Well that's the way they have to work,” but a week later, “Oh yes, Chris,” they said, “yes, no problem.”

Joie Chen: We have come to Ducks Eatery where they've taken everything that we think of as the most traditional of New York dishes and managed to innovate them. The perfect place for us to talk about innovation and what that means.

Chris Riccobono: A lot of times you think of it as a product or a technology, but it's really the way a lot of these younger companies are doing business.

John Farrell: Innovation is a “must have” to stay ahead of their market. Because of start-ups and because of a lot of other disruption, they may not be.

Title: EMBRACING INNOVATION: DISRUPT BEFORE YOU ARE DISRUPTED

Joie Chen: These guys have businesses that really are on the forefront of that innovation.

Chieh Huang: That's right. We’re advantaged by not being in the industry before because we didn't know what’s possible and what's impossible.

Chris Riccobono: You've got to be so nimble these days. And, these other companies who now are chasing us, they can't do it because their culture wasn't built that way.

Colleen Drummond: That's right. One of the key things that's happened is our best experiences have become our expectations. If you are an incumbent company, what do you need to do to actually go about changing to compete?

John Farrell: They have to get the capability of understanding the signals in disruption and looking around the corner. They need to become agile. They need to set a whole different context than they ever had.

Factoid: 57% of CEOs SAY THEY DON’T HAVE AN INNOVATION PROCESS IN PLACE TO RESPOND TO RAPID DISRUPTION

Joie Chen: You were the disrupter a minute ago, but now you are the establishment.

Chieh Huang: Yes, you are starting to see other folks looking at us and saying, “is there something there that we can try to take or copy” and so we need to speed up our pace of Innovation.

John Farrell: Most big companies have built themselves around efficiency. Recognizing innovation is inefficient is actually one of the first things you need to do. They have to get used to being uncomfortable.

Colleen Drummond: And to be able to deal with the ambiguity. There's this fog that you go through when you are trying to get to the other side. It's not that innovation is always obvious.

Factoid: 60% OF CEOs SEE TECHNOLOGY DISRUPTION AS AN OPPORTUNITY RATHER THAN A THREAT

Colleen Drummond: Where our clients were worried about start-ups disrupting them, they’re now looking to start-ups to help them innovate.

Chieh Huang: Innovation went from a “nice to have,” to “great to have” to now, for every major CEO of any company, I would say innovation is a “need to have.”

John Farrell: Yes and also they are actually recognizing that they need to build a capability of this signal to action or investment outside the normal operations so they can become innovative and then bring it back into the business and balance the two.